Journalist and football writer Tom Victor has recently written a book about the man who finally delivered a Premier League title to Liverpool; Jurgen Klopp.

‘What Would Jurgen Klopp Do?: Life Lessons from a Champion’ is essentially a guide about getting through life by following examples set by the Liverpool boss.

It’s a celebration of the Germans‘ career and achievements, whilst also giving an insight into how food and music have shaped him, including the introduction of ‘Top of the Klopps’ and how to make your very own ‘Klopptail.’

The cool uncle of football. He’s your school friend’s dad who always greets you like you’re his friend as well. The popular colleague who always makes you feel like you’re on his level.’,and why wouldn’t you want to follow in his footsteps?!

Tom spoke to Read Liverpool about Klopp and also the process of writing the book: 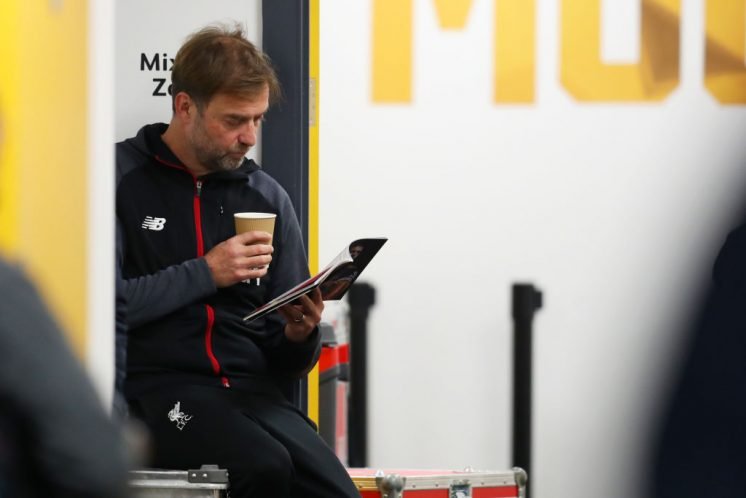 No manager can really compare to Jurgen Klopp in the current footballing world, he’s one of a kind almost, was that an influence for this book?

“He’s absolutely much easier to write about than most other managers in the game, there’s maybe templates where people are kept a bit more guarded than Klopp. If he feels strongly about something then he won’t play by the book or anything like that.

“When I was approached to write this, the fact it was Jurgen Klopp rather than another manager, certainly in English football, definitely made it easier to envisage how it would play out.”

The book really encapsulates the aura that Klopp has always given off, how do you get into the headspace to do that?

“It’s a challenge. A former colleague of mine, who has interviewed Klopp, came to me and said ‘based on what he was like when I met him, you’ve nailed it’ which was a really nice thing to hear. You piece things together through interviews, written stuff, press conferences and so on and so forth.”

Klopp’s humour is such a huge part of his character, it would almost seem amiss to write a book that was solely serious, was that part of the thinking behind it?

“Oh yeah, it absolutely makes sense to kind of have a bit of levity to all of it because that’s the sort of person that he comes across as. If I was to write about Jurgen Klopp and it was all going to be straight-based, by the book stuff then it would just feel clunky and off. You have no other option than to keep it humorous, keep it light and go from there really.”

You make him very relatable, especially in the Mentality Monsters chapter comparing him to everyday bosses, will people connect with that do you think?

“I think people can often overplay the idea of ‘the everyman’ within football. I think the football world is necessarily different from day-to-day, so you cant overplay it, but at the same time, there’s a lot of individual quirks that you see from Klopp, and other managers as well, that definitely resonates.

“We’ve all had certain types of bosses at some point in our careers and even if they’re not doing it on purpose, they can fall into these categories.”

I’ve never seen music, food and Klopp articulated together like the latter chapters of the book manage, where did that come from?

“I’ve got to thank my editor and publisher for giving me a bit of freedom to go down some off-piste routes, and to be able to frame it in advance with this is what these chapters are going to be focussing on, and this is going to be the roadmap we have for it.

“There are certain things when I’m doing my research and I’m seeing quotes from Klopp and about Klopp, like the David Wagner stuff about the wedding and best man speech, some of that points you in the right direction.

“I’ve always been a big fan of German football. When I started working in football many years ago, I would often go down to this great German pub called Zeitgeist in South London where they would be showing Klopp’s Dortmund pretty much every week. That kind of culture, and having been to Germany a bunch of times, helped me see both 2011 and 2020 Klopp and all of that makes things come more naturally than they would have.”

The title is a feature that runs throughout the whole book with lots of humorous scenarios, was that always the plan?

“I guess there’s a few ways you can do it. You can have it as the overarching then have a bunch of other stuff here and there, but I think having it always come back to the title makes it easier to give me a focus throughout and stop me from wandering down avenues where I’m deviating too much from the message.

“It’s not designed to be ‘what would Jurgen Klopp do at the exact moment I was writing the book’ it’s the whole version of him from Mainz when he was playing, through Dortmund and then Liverpool. It’s the familiar aspect across that and the idea of what Jurgen Klopp stands for, whoever you are.”

The book shows how Klopp and Liverpool are a perfect match, not just the manager and the team, but his persona and the city, how long do you think Klopp could stay here?

“I spoke to a few Liverpool fans throughout. One is Dan Austin, who has been born and raised Liverpool and has been at Anfield pretty much his whole life. Week upon week, he’s been in the city and it was nice to get his perspective on the city from someone who has lived there his whole life. Especially versus some of the other Liverpool fans who are from the south or different parts of the country, where their perception of Liverpool the city is shaped very differently by the fact that probably more than 50% of the time that they’re there is for a game.

“The fact that both those types of person can read into Klopp being a great thing for the city of Liverpool as well as the club, I think that does give a good idea of it. There are certain English clubs where you are successful but don’t have the same connection maybe. Certainly, its hard to perceive where he’s going to wind up next but off the top of my head I couldn’t see him managing anywhere else in England.

“After Dortmund, he took a bit of time out rather than rushing into another job, as he wanted to get the right one. I have no idea how long he’s going to be at Liverpool, but I can see it having the long-lasting effect on him that when he does decide to leave, he doesn’t do anything for at least a year or two after that.”

Tom’s book, What Would Jurgen Klopp Do?: Life Lessons from a Champion is available to buy now.