Thiago Alcantara’s name has been mentioned quite frequently in connection with Liverpool recently, with some outlets claiming he may sign for the Reds, and some quashing those rumours.

The latest update in the saga is that Liverpool and Bayern Munich have reached a ‘general agreement’ for the playmaker and that Bayern won’t block his exit.

Italian publication Tuttomercato claim that the two clubs now just need to agree on a price for the Spaniard in order for the move to materialise.

Rumours have circulated in the last few weeks that Bayern were looking to get around £30 million for Thiago, but Liverpool were apparently apprehensive to pay such a sum in one instalment.

The 29-year-old has just one year left on his current contract and is looking for a new challenge, after seven very successful years at the Bavarian giants.

The ex-Barcelona man has made 231 appearances for Bayern since joining in 2013, scoring 31 goals and providing 37 assists, whilst winning seven Bundesliga titles and four German Cups. 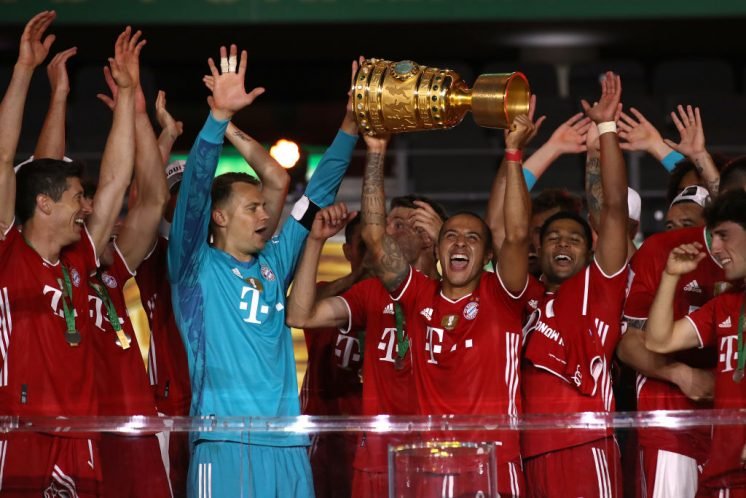 It’s hard to say whether Liverpool fans should believe all the reports coming out regarding Thiago’s signature, as many are so conflicting.

However, if he was to sign, his ability could quickly elevate the quality of The Reds’ current midfield and he will add another dimension to the Reds’ midfield three.

At 29, Thiago will only be able to offer his best for a few seasons and as such, he would be different to many of Jurgen Klopp’s other signings during his tenure, as he has often brought in younger players.

If Liverpool can secure Thiago for the right price, and if he can stay fit, then his sheer quality could go a long way to help The Reds retain their Premier League crown next season.

He has been a serial winner in his time at Bayern, and his technical and passing ability can’t be matched by too many players in world football.