Few players get the better of Liverpool defender Virgil van Dijk in a battle of strength – something Luis Suarez discovered the hard way.

The former Red was a second-half substitute for Atletico Madrid as the La Liga champions failed in their attempt to grab a late equaliser at the Wanda Metropolitano.

Somewhat a master of the dark arts and well known to Kopites, Suarez was up to all of his usual tricks in trying to gain an advantage.

Hoping to win a cheap free-kick from Van Dijk, the Dutchman was having none of the nonsense and let the forward know who was boss.

This incident came shortly after Antoine Griezmann had been dismissed when a high boot only found the side of Roberto Firmino’s head.

In the ensuing aftermath, Andy Robertson was barged aside from the furore by an Atletico player as the game began to develop a nasty edge.

Albeit much loved on Merseyside, getting one over a player of Suarez’ ilk is about as sweet as it gets.

Very much in the mould of manager Diego Simeone, the Uruguguan will do whatever it takes to win and Liverpool are now well versed in facing the ace having overcome Barcelona in 2019.

On this occasion, Van Dijk came out on top of the personal battle as well as the match as Jurgen Klopp’s won a ‘dirty’ contest.

Hostilities will be renewed in just a few short weeks as Atletico head to Anfield for the return clash.

Is Luis Suarez A Liverpool Icon? 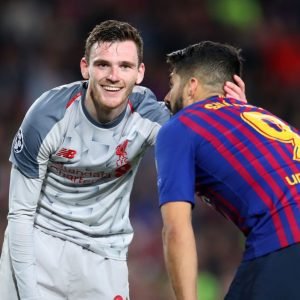 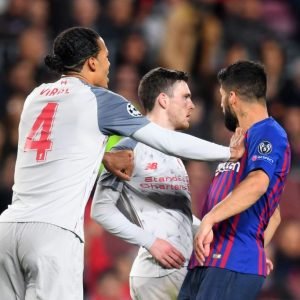