Liverpool are once again being linked with a move for Red Bull Salzburg forward Karim Adeyemi.

The Reds have been named as being among the leading suitors for the 19-year-old for some time now and a January bid could be forthcoming.

Continued impressive displays in Austria and in the UEFA Champions League have been attracting further attention as Europe’s elite circle.

Now, a fresh report from Sky Germany, as cited by Anfield Edition on Twitter has claimed Liverpool are indeed in the race for the talented teenager.

The report adds Paris Saint-Germain to the mix as clubs race for the three-cap Germany starlet billed as ‘one of the most hunted players’ on the continent.

So far this season Adeyemi has scored 14 times and provided two assists in 18 appearances across all competitions.

Despite reports suggesting that the African Cup of Nations could be in danger of being cancelled, as things stand Jurgen Klopp is going to be bereft of attacking options when Sadio Mane and Mohamed Salah depart in January.

Signing a versatile operator such as Adeyemi would provide the perfect solution for both the short and long term.

Valued at £18million and under contract in Austria until 2024 (Transfermarkt), Liverpool should be desperate to be at the front of the queue to repeat their Takumi Minamino trick from 18 months ago.

Should Liverpool Attempt To Sign Karim Adeyemi In January? 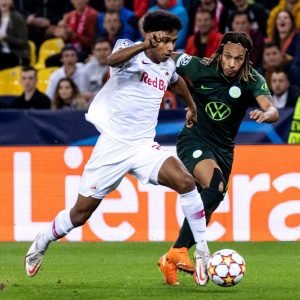