The 19-year-old only arrived in the Spanish capital in September 2021 for £34.4million (Sky Sports) but could already be looking for a way out.

Following the departure of the ever-reliable Georginio Wijnaldum to Paris Saint-Germain, Jurgen Klopp’s midfield options have been stretched to the maximum.

According to a report from El Nacional, as cited by 263Chat.com on Twitter, the Reds are keen on the French starlet.

Transfer Gossip: Liverpool are monitoring Eduardo Camavinga's situation at Real Madrid having been admirers of the 19-year-old French midfielder for some time.

The report claims that Camavinga is ‘not at all happy’ at Los Blancos and Klopp ‘has his eye on’ the three-times capped France ace.

This season the teen hailed as a ‘little dancer’ by Paul Pogba has scored once and provided one assist in 27 appearances across all competitions.

Valued at £49.5million and under contract at the Bernabeu until 2027 (Transfermarkt), any move for the Frenchman would undoubtedly be an expensive one.

However, with the regular injuries of Thiago and Naby Keita, coupled with James Milner’s imminent retirement, a midfield addition is a must this summer.

Capable of operating in a defensive position as well as a box to box role, the former Stade Rennais man would be a ready-made successor to Jordan Henderson and Fabinho alike.

Already an established performer at the top level aged just 19, Camavinga has the pedigree, potential and attributes to be an important addition to Klopp’s ranks. 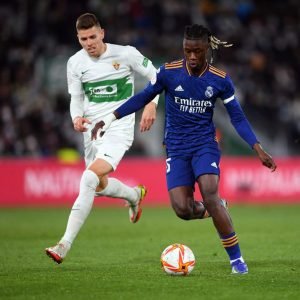 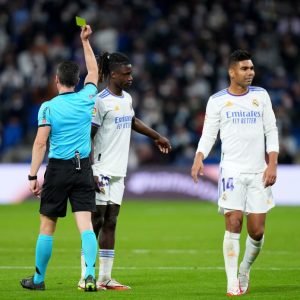