A number of Liverpool fans have been wowed by footage of Diogo Jota’s superb team goal against Leicester City.

The Reds eased to a 3-0 win over the Foxes on Sunday evening, producing a performance that suggests they are once again Premier League title favourites this season.

It was Jonny Evans’ dreadful own goal that got the ball rolling at Anfield, with Roberto Firmino completing the scoring with a much-needed late strike.

Sandwiched in between those goals was the best moment of the night, however, as Jota finished off a brilliant team move that involved 30 passes in total.

The in-form Portuguese buried a header from Andy Robertson’s perfect cross, but at the time you could be forgiven for thinking the goal wasn’t anything too special.

On reflection, though, it was one that was brimming with quality and patience, highlighted by Liverpool’s official Twitter account on Tuesday:

The Reds were magnificent all evening against a Leicester side powerless to do anything about them winning, and Jota’s goal was a thing of real beauty.

These Liverpool supporters loved what they saw after the video was posted, hailing the brilliance of the goal on Twitter and showing their adoration for this wonderful football team.

This team made the lfc fans so proud by putting a very strong performance against a respected opponent with all the injuries , the young boys such as jones and neco proved you can count on them if any injuries occur in the future 👏👏👏

Every outfield player touched the ball… with the last one being Jota with the header!

We don't play tiki-taka but the way we move the ball is the most efficient in the league by a mile. Love this team man

Just watch Keita and nothing else.

That is centre midfield craftsmanship at its finest.

Liverpool are the most complete team in world football in terms of tactics.

Will Liverpool retain the Premier League title this season? 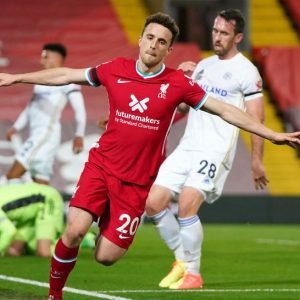