There was universal concern earlier in the week when the Dutchman limped off following Netherlands’ 6-1 victory over Turkey.

Despite the 30-year-old acting to allay fears in a post-match interview, worries remained that the more accurate prognosis would be damaging on a return to Merseyside.

In the build-up to the trip to Elland Road, Klopp spoke to the club’s official website, as cited by Paul Gorst on Twitter, about Van Dijk’s availability.

Twitter: Jurgen Klopp on Virgil van Dijk’s availability for Leeds on Sun: “With Virgil, that was obviously a scary moment, y… https://t.co/ivWOl1ipls (@ptgorst)

Klopp also confirmed both Harvey Elliott and Naby Keita should be ready for the clash despite pulling out of international duty for contrasting reasons.

Meanwhile, the biggest selection headache facing both managers surrounds the Brazilian stars that were refused permission to travel recently.

FIFA has imposed a five-day playing ban on Alisson Becker, Fabinho and Roberto Firmino for a Reds’ perspective, whilst Leeds will be without Raphinha as things stand.

Gorst doesn’t believe Liverpool will select their Brazilian’s unless a ‘clear resolution’ can be found.

Twitter: @CathalRobinson @IanDoyleSport I guess so. For what it’s worth, I don’t think they’ll play unless there’s a clear resolution by Sunday. (@ptgorst)

Positive news on the Van Dijk, Keita and Elliott front at least.

Kopites everywhere would have released a huge sigh of relief as their Dutch centre-back made a quick recovery this week.

Players like him will be all the more important on Sunday should Klopp be without Alisson and Fabinho in particular. 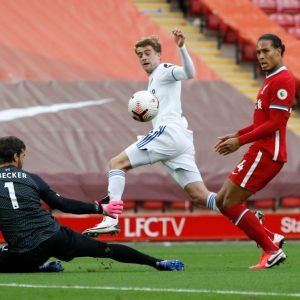