Liverpool will be desperate to make an immediate return to winning ways following the international break when Arsenal arrive this evening (Saturday, November 20).

The Reds tasted defeat for the first time this season prior to the break as all-conquering West Ham got the better of 3-2 contest at the London Stadium.

Despite the defeat, Jurgen Klopp’s side remains in a strong position across all competitions and victory against the Gunners will silence any detractors once again.

Writing in his BBC Sport prediction column, former Anfield icon Mark Lawrenson has backed the Reds to do exactly that.

You can see the improvement from front to back [from Arsneal] – in attack Pierre-Emerick Aubameyang and Alexandre Lacazette seem to be playing with a smile on their faces and Ben White has settled everything down at the back. Let’s see how they get on at Anfield before we get carried away though. Liverpool looked porous in the final half-hour of their defeat by West Ham so I’d fancy Arsenal to create chances against them. The question is, will the Gunners hold out?

Despite the criticism and an upturn in Arsenal’s form, Lawrenson tipped Klopp’s side to prevail 2-0 in the 5:30pm kick-off on Merseyside.

Liverpool will be without Curtis Jones and Roberto Firmino whilst Harvey Elliott is still a long-term absentee.

Klopp confirmed Naby Keita, Joe Gomez and James Milner were nearing a return to the fold whilst Fabinho, Jordan Henderson and Andy Robertson were all touch and go for this clash.

Arsenal presents a very real and dangerous threat to Liverpool, especially in the wake of apparent recent defensive frailties.

However, at full tilt the Reds have already proven they are more than a match for any side and Klopp will be hopeful a short break from domestic action has given his players time to reflect on recent displays.

Although injuries elsewhere continue to take hold, Sadio Mane, Diogo Jota and Mohamed Salah will be confident of causing plenty of problems. 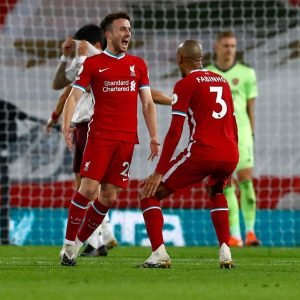 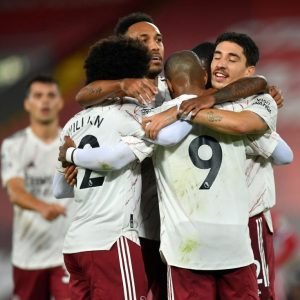 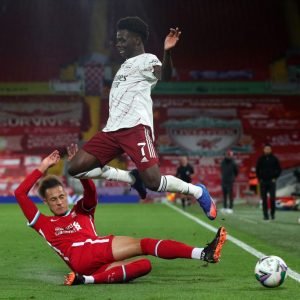