Liverpool have been named as potential suitors once again for Borussia Dortmund striker Erling Haaland.

The future of the 21-year-old phenomenon continues to be a topic of much transfer speculation and the Reds seem to remain in with a shout.

Despite extensive links to Real Madrid and Manchester City, it would appear that choosing the Norwegian’s next destination is far from straightforward.

According to a report from Mundo Deportivo, as cited by LFC Transfer Room on Twitter, Liverpool may yet throw their hat into the ring.

❗️Amid uncertainty over Mohamed Salah's renewal #Liverpool could turn their eyes to BVB's Erling Haaland, same with Bayern Munich and the Lewandowski situation.

The report claims that both the Reds and Bayern Munich could turn to the 15-cap superstar should either Mohamed Salah or Robert Lewandowski move on.

So far this season Haaland – described as ‘lethal’ by Thierry Henry – has scored 23 times and provided six assists in 23 appearances across all competitions.

Valued at an eye-watering £135million and under contract in Germany until 2024 (Transfermarkt), taking advantage of a mooted €75million (£63million) release clause would be a truly extraordinary piece of business.

Whilst the likely astronomical wages would be a stumbling block for any potential suitor, particularly Liverpool, there can be no doubting the sheer level of quality Haaland possesses.

Boasting ridiculous pace, power and a scoring record, adding the Norwegian to the Anfield ranks under Jurgen Klopp would be a frightening proposition and one that would supplement any potential loss of Salah.

Meanwhile, a report elsewhere from UOL has claimed another of the Reds’ attacking targets, Leeds United winger Raphinha, is wanted by Barcelona. 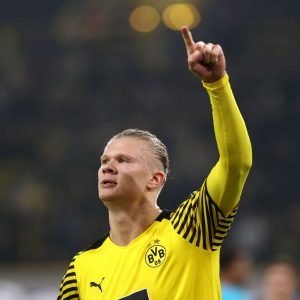 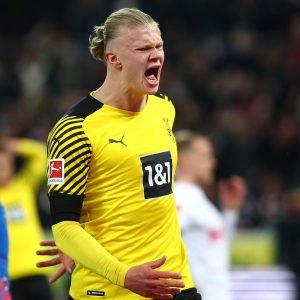