The Guinean ace has seen an increase in game time this season since the Dutchman left as a free agent in the summer.

Signed from RB Leipzig in 2017 for an initial £48million (BBC), the 26-year-old has previously struggled to stamp his authority on Jurgen Klopp’s side due to fitness concerns.

He’s taken on a role this season he didn’t have last year. Wijnaldum played a lot of the games but he’s at a point where he’s going to get more game time. The three in midfield, with Milner and Henderson, their combined ages would suggest they’re not going to be able to play 60 games each this year. It’s going to be a squad game for Liverpool this year and it’s a role Keita’s going to have to take. To take on the mantle of Wijnaldum and what he did last year. Based on Sunday’s performance, as long he’s not injured for any length of time, he can do that.

Keita was stretched off at Old Trafford following a Paul Pogba horror challenge but according to a report from The Athletic is expected to make a quick recovery.

So far this season the 38-cap Guinea captain has scored three and assisted one goal in nine appearances – meaning the midfielder is well on course to far outdo the exploits of 2020/21.

Kopites have been waiting patiently to see the best of Keita.

Having arrived with huge expectations in 2018 following a year watching his excellent Bundesliga performances, the dynamic ace has been badly hampered by injuries and fitness issues.

Undoubtedly a player with the ability to feature prominently in Klopp’s side, if the £28.8million valued star can get anything close to Wijnaldum’s 51 outings from last term then everyone associated will be delighted.

Despite returning to fitness, it’s unlikely Keita or Fabinho will feature against Preston North End on Wednesday night as Klopp guards against further midfield injuries having lost Thiago and James Milner. 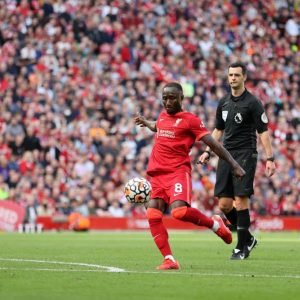 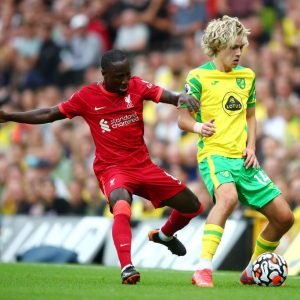