Liverpool advanced through to the Carabao Cup final thanks to a stunning brace from Diogo Jota.

The 25-year-old forward was in superb form as the Reds swept Arsenal aside 2-0 at the Emirates Stadium.

In truth, the Portuguese ace has been a revelation since arriving at Anfield and now has 30 direct goal contributions in just 57 outings for the club.

Immediately after the match, many jubilant Liverpool fans took to Twitter to hail their two-goal hero.

Fantastic! Not only your goals, but your all round contribution to the team was outstanding! #YNWA

The man is absolutely deadly

Diogo Jota sending Tomiyasu and Ben White and scoring past Ramsdale yet again this season, my striker. 🐐

Thank god we got jota instead of werner 😐😬

This season the 22-cap Portugal man who was ‘on fire’ according to Jurgen Klopp has scored 14 times and provided two assists in 27 appearances.

Although the likes of Curtis Jones, Trent Alexander-Arnold impressed on the night, Jota stole the show.

Not only has the former Wolves ace managed to infiltrate the previously untouchable front three, but he is now a key player within it.

Having been met with surprise at the time, the £41milliion (BBC) is looking more of a bargain with each passing game.

Next up for the Reds it’s Crystal Palace in what could be the final game without Mohamed Salah, Sadio Mane and Naby Keita.

Can the £54million valued Jota step up once again? 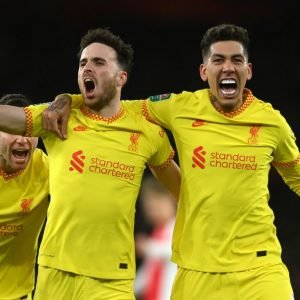 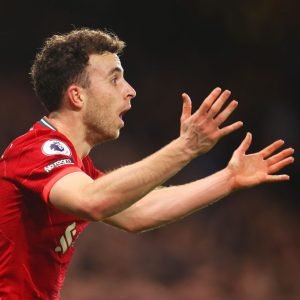