Liverpool have been named on a three club shortlist to sign Borussia Dortmund superstar Erling Haaland.

The 21-year-old Norwegian is set to be the hottest property in world football next summer with clubs across Europe queueing up for the striker.

Despite being one of the leading stars on the globe, Haaland is expected to be available for a €75million (£63.7million) release clause in 2022.

According to Tuttosport, as cited by LFC Transfer Room on Twitter, Liverpool, Paris Saint-Germain and Real Madrid are in contention for the phenomenons’ signature.

The report goes one step further and claims that there is a 25 per cent of seeing the 15-cap Norway man at Anfield, whilst the French giants hold a 50 per cent majority.

Already a multi accolade winner, this season Haaland, who was described as ‘lethal’ by Thierry Henry, has scored 11 and provide four assists in just eight appearances across all competitions.

Whichever club wins the race for Haaland looks set to stand themselves in powerful stead for many years to come.

A truly extraordinary goalscorer, seemingly improving all the time, the Norwegian powerhouse would be a revolutionary capture.

Liverpool are certainly in need of a recognised striker to replace Roberto Firmino in the long term, Haaland would be almost every Kopites’ dream.

Whilst the mooted wages and all-round finances are beyond reason, a statement signing is needed on Merseyside and there would be none better.

Ultimately the choice will be Haaland’s and the romanticism of a move to Liverpool and Anfield – a ‘dream come true’ to the Norwegian – may hold strong sway. 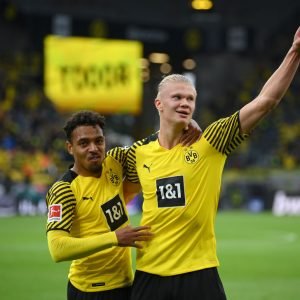 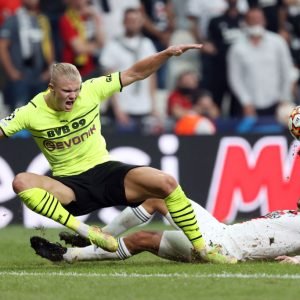