Liverpool have been named among the possible suitors for RB Leipzig star Christopher Nkunku.

The 24-year-old has been linked with the Reds previously and now it appears as though Premier League rivals Manchester United, Manchester City and Arsenal are also in the mix.

La Liga giants Real Madrid also hold an interest in Nkunku, who has earned an outstanding 7.48 average Sofascore rating in the Bundesliga this season – the fifth highest in the German top-flight.

According to a report from ESPN, Liverpool remain keen on the attack-minded French midfielder.

The report claims that the six-cap France Under 21 ace has ‘attracted the attention’ of the Anfield club with a string of superb displays.

So far this season Nkunku – described as a player with ‘no weaknesses’ by Jesse Marsch – has scored 19 times and provided 13 assists in just 31 appearances across all competitions.

Few signings would excite Liverpool supporters as much as the capture of the Frenchman.

Immensely versatile and already a serial trophy winner following a spell at Paris Saint-Germain, Nkunku has everything it takes to thrive in a Jurgen Klopp lead side.

Possessing a wide variety of impressive attributes, Liverpool should be at the very front of the queue for the £49.5million valued ace – especially in light of domestic interest. 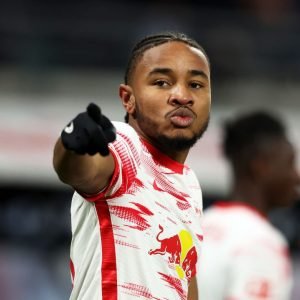